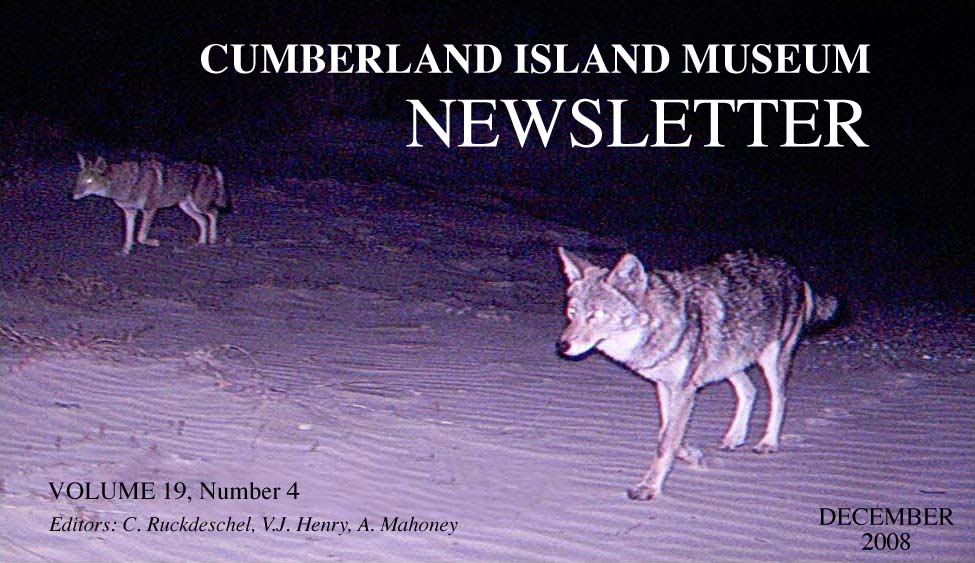 In the December 2007 edition of the Newsletter, we had an article describing the possibility of coyotes on the island. Interest began in 1989 when we suspected one was on the island based on various signs, but sign of it disappeared after 8 to 10 months. In 2005, tracks began appearing away from human use areas and their frequency increased. By 2007, there had been a couple of sightings and tracks were fairly common. Campers on the island reported hearing a howl in the vicinity of Yankee Paradise in April of that year.

Tracks became so common this year (2008) that some fecal material could be positively attributed to a coyote. It revealed that hogs, deer, and fruit were being eaten. But until the camera caught a picture of them, speculation was all we had. Since there are at least two coyotes on the island at this time (the photo was taken 21 November 2008), the likelihood of a pair remaining on the island seems strong.

Although coyotes are territorial and typically remain in their territories, pups must disperse, and food shortages will cause adults to enlarge their home range. Average dispersal distance for pups is 80 to 160 km (50-100 miles), which puts all the Georgia barrier islands within easy reach for many. Coyotes swim well, and have been reported throughout Georgia and on several of the other barrier islands.

Coyote home ranges in south central Georgia were calculated at between 10.1 and 12.4 km2 (6.31 and 7.75 miles2), which, given the size of the island, means a limited population density. However, a study in California found that coyote populations were more dense along the coast than inland, and attributed the increase to the subsidy of marine resources to their diet. Data on food along the East Coast are lacking, and the scats examined from the island are few, but have not included a marine component. Deer, hogs, persimmons, palmetto berries, and fruit of the tough bumelia have been represented, but we will be on the lookout for marine-related species.

Mating occurs once a year usually between January and March, and the young are born between April and June. They are helpless for the first couple of weeks of their life, but are weaned at 5 to 7 weeks, and reach adult weight at about 9 months. They breed in their second year. Both parents care for the pups. Longevity in the wild may reach 13 to 15 years, so if a pair finds Cumberland to its liking, coyotes will no doubt be permanent residents.

It is surprising how the number of species on the island fluctuates. Since the early 1970’s, we have had at least four new moderate to large mammalian species become part of the island ecosystem, if only temporarily: bobcats, beaver, opossums, and now coyotes. The beavers and the coyotes we assume arrived under their own power, although hunters sometimes release coyotes on the mainland. The beaver’s residence was brief.

See more articles like this in the Cumberland Island Museum newsletter.

You are here: Home » Coyotes on Cumberland