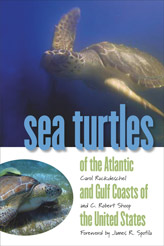 The University of Georgia Press has published Sea Turtles of the Atlantic and Gulf Coasts of the United States by Carol Ruckdeschel and C. Robert Shoop of the Cumberland Island Museum, with Meg Hoyle, Photo Editor.

The 152-page book, available for $22.95 per copy, is an accessible, fully illustrated guide to the species that frequent the Atlantic and Gulf Coasts of the United States.

These majestic creatures have been swimming in the earth’s oceans for a hundred million years. But today all of the world’s sea turtles, including those described in this book, are endangered. This guide will help readers better understand the biology of sea turtles and appreciate conservation efforts on their behalf.

The book includes the following information about each species covered:

The museum’s 2000 book, Sea Turtles of the Georgia Coast, is still available as well.